Progress II was a simplified programming language that let operators quickly describe various processes in typical office tasks. Mitsubishi Electric’s first release was Progress, which came with AOS, the operating system for the MELCOM 80 Model 31 announced in 1974. Progress II was released in 1979 in tandem with the DPS II operating system. The name Progress was taken because it was a “progressive” programming language and because it had the sense of “programmer-less.”
Progress II was pre-packaged with a series of procedures and routines used in most business-process applications. The packaged procedures and routines were dubbed “process cycles.” There were two types of process cycles: “batch process cycles” for tabulation processes and report making, and “workstation process cycles” for interactive processes such as billing or inquiries. These process cycles made applications four to five times more productive than ones written in COBOL, and it was said that more than 90 percent of MELCOM 80 applications were developed in Progress II. There are more than a few examples of business programs created in Progress II thirty years ago still in operation at the time of writing in 2009. Progress II may, in fact, be Mitsubishi Electric’s most distinguished office computer product.
The figures below show a Progress II entry sheet and a workstation process cycle. 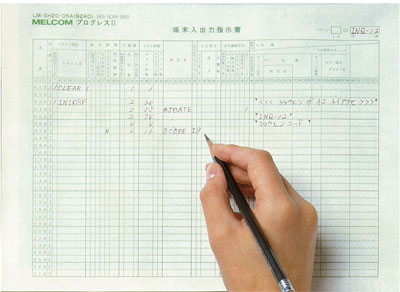